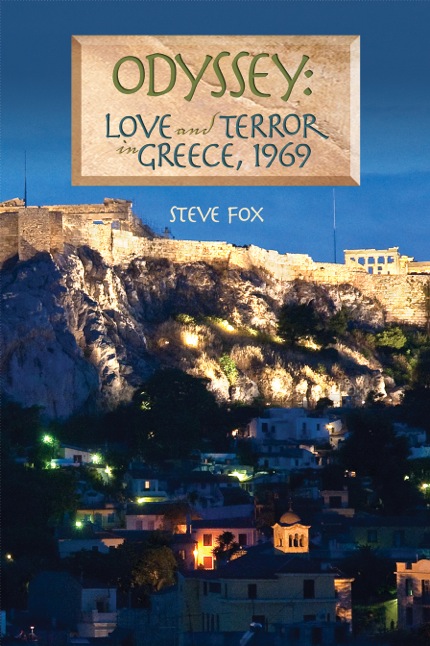 Steve Fox had just started his second semester of graduate English study at the University of Texas in January, 1967, when he was drafted to serve in the voracious Vietnam War. But Fox, 23, kept his eyes open and learned how to adapt, resist, and avoid the war in Asia with timely help from a string of angels he meets. He got himself assigned to Athens Air Base in Athens, Greece, where Greek and American friends reveal the terrors of the dictators—known as The Colonels—running the country. In 1969 an ex-Greenwich Village folksinger and Steve’s mentor in Athens, Allan Wenger, makes Steve part of the Greek Resistance to the Colonels. Steve and his smart and sassy American girlfriend drink deep of Greek ruins and lore, set a headlong course of self-reinvention as they return to the U.S. and Mexico, and explore the tangled path of love in revolutionary times.

John Nichols, author of The Sterile Cuckoo, The Milagro Beanfield War, The Magic Journey, The Nirvana Blues, and major  (uncredited ) work on the screenplay of the Costa Gavras movie Missing

“Steve Fox’s rousing memoir, ODYSSEY: Love and Terror in Greece, 1969, is part high drama, part fumbling comedy, sort of like Austin Powers meets Z, a Costa-Gavras political thriller about the rightwing military coup in Athens. The book is a great page turner, a fast-paced yarn with no yawns and written with a fine combination of innocence and moxie. There’s plenty of intrigue, both of the salacious kind and of the military junta sort, surrounded by enough confusion and danger to make any twenty-four-year-old lieutenant in the U.S. Air Force think twice. Steve was that Air Force lieutenant, and we are fortunate that he didn’t think twice . . .and lived to tell the tale. His writing is sleek, humorous, engrossing. In the background Kazantzakis, Lawrence Durrell, and the poet Cavafy keep a sly watch over the American hijinks, occasionally cracking a smile. If you like your ouzo straight up, you will really enjoy this book. Melina Mercouri would have loved it!”